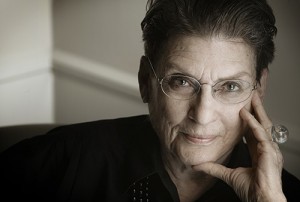 A unique incursion in the world of Phyllis Lambert, an important personality on the world of architecture. Phyllis Lambert is recognised by the international community for her contribution to the promotion of contemporary architecture and for her defence of social aspects of conservation of urban heritage as well as the public dimension of architecture. As an urban activist, philanthropist and founder of the Canadian Center for Architecture (CCA) in Montreal, Phyllis Lambert has created a collection of architecture unique in the world. Citizen Lambert: Jeanne d’Architecture, directed by Teri Wehn Damisch, looks at Phyllis Lambert’s creations: her collaboration with Mies van der Rohe for the Seagram Building in New York in the fifties; her photographic missions, starting from the seventies, for a reconnaissance of historical monuments; the urban guerrillas that she carried out for the construction projects of the Milton-Parc district, amongst others; the creation of Heritage Montreal; and the constitution of a collection that would lead to her founding the CCA as a museum and a research centre.