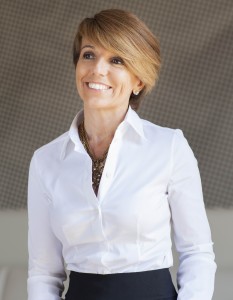 Patrizia Sandretto Re Rebaudengo is married and has two sons. After graduating in business studies and economics, she first started collecting contemporary art in the early nineties.

What started as a hobby, rapidly became a full time career when she founded the Fondazione Sandretto Re Rebaudengo in 1995, of which she is President.

The Fondazione Sandretto Re Rebaudengo set up its first gallery at the Palazzo Re Rebaudengo in Guarene in 1997 and officially opened its current headquarters, a centre for contemporary art in Turin, in September 2002. The Turin space is a flexible structure that can put together exhibitions quickly and efficiently to respond to today’s trends, working with artists, critics, curators collectors and institutions from around the world to promote and support the production and exhibition of contemporary art at an international level.

Among other Italian honors and awards for her work in the art world, she also received the Mont Blanc Arts Patronage Award for her dedication to contemporary art in 2003 and was awarded the title “Chevalier dans l’ordre des Arts et des Lettres” by the French Ministry of Culture in 2009.